The Surprising History of Hydrogen Vehicles 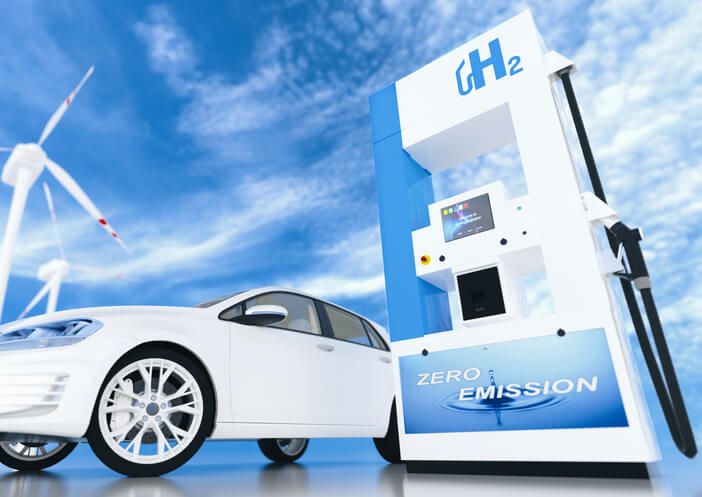 You may have seen a hydrogen-powered car or two on the road recently — but did you know that hydrogen technology goes back to the 1800s?

Today we’ll review the history of hydrogen cars, from their humble beginnings to where they are today: a promising complement to internal combustion engines and electric vehicles for personal and commercial usage.

The first internal combustion engine was powered not by gasoline but by a mix of hydrogen and oxygen in 1806. Swiss engineer Francois Isaac de Rivaz contained hydrogen gas in a balloon and used an electrical Volta starter for the ignition. Unfortunately, the hydrogen-powered car designed by Rivas the following year was a failure.

While the first fuel cell was conceived in 1839, the term “fuel cell” was first used in 1889 by Ludwig Mond and Charles Langer, who built a fuel cell using industrial coal gas and air.

1900s: Hydrogen Takes a Back Seat to Gasoline

Fast-forward to 1933 and the birth of the next hydrogen vehicle. Norway’s Norsk Hydro power company developed a hydrogen-powered truck that used an internal combustion engine propelled by extracted hydrogen from an ammonia reformer.

In 1939, a British engineer named Francis T. Bacon developed a five-kilowatt fuel cell, the first mainstream fuel cell of the 20th century. It took Bacon twenty more years to refine his design to the point where the cell could power a welding machine.

In 1941, Russia converted 200 gasoline-powered trucks to run on hydrogen. Hydrogen gas burned cleaner and ran longer than gasoline, which was in short supply due to WWII fuel shortages.

In 1959, a fuel cell powered a 2-horsepower tractor, the first of its kind. In the early 1960s, GE produced a fuel-cell electrical power system for NASA’s space program. To this day, these hydrogen fuel cells provide drinking water for space crews during flight.

In 1966, General Motors’ Electrovan, one of the first fuel cell electric vehicles (FCEV), used a fuel cell that combined liquid oxygen and supercooled liquid hydrogen. This innovation was the first step toward using pressurized hydrogen and oxygen derived from ambient air.

The Navy began studying using fuel cells in submarines to utilize their efficient and stealthy operational qualities. Submarines powered by fuel cells can remain underwater, undetected, for up to three weeks.

In 1998, Iceland announced its plan to create a hydrogen economy.  Iceland planned to convert all of its public transportation vehicles to fuel-cell vehicles over a span of ten years.

In 1999, the first commercial hydrogen station for trucks and cars was opened in Germany. Meanwhile, Daimler Chrysler introduced its liquid hydrogen vehicle, the NECAR 4, to critical raves.

As the new millennium began, concerns over emissions, efficiency and energy security began to surface. Increased focus on reducing dependence on fossil fuels was a catalyst for revisiting the development of fuel cells as a sustainable energy source.

In 2018, Norway, China and parts of the UK began using fuel cell buses and other hydrogen-powered vehicles. Hydrogen plants began to spread, enabling countries like Australia to produce and export hydrogen fuel.

These makes and models* include:

According to the American Department of Energy (DoE), fuel cell costs have fallen by 80% since 2002. They also reported that further developments in fuel cell technology could put hydrogen car prices within an average consumer’s grasp within a decade.

The Future of Hydrogen Vehicles

Hydrogen-powered consumer vehicles may take more time to become viable for large-scale distribution, primarily because of infrastructure limitations. That being said, the market for commercial vehicles powered by hydrogen is promising.

Contact us today to learn more about how FASTECH can help with your hydrogen fueling project.