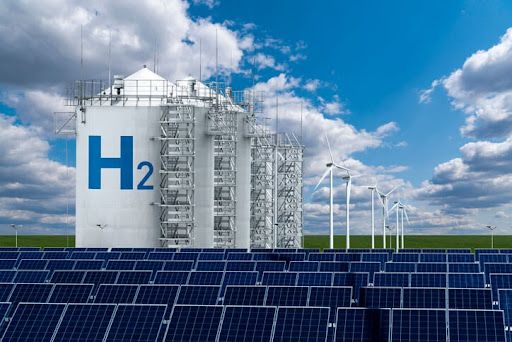 What is green hydrogen, and what will it mean for the future of renewable energy? In this article, we’ll learn more about the advantages and disadvantages of green hydrogen and how we can use it to reduce carbon emissions.

What Is Green Hydrogen?

Hydrogen has a widely renowned reputation for fuel efficiency thanks to generating energy without releasing carbon dioxide into the atmosphere. Hydrogen can also easily be transported over long distances due to its light weight, making it easier for regions without many resources to access renewable energy.

Green hydrogen is produced through a chemical process called electrolysis, which uses an electrical current to separate hydrogen from oxygen in water molecules. The electricity used in electrolysis must also come from renewable sources like wind, water, or solar power so that the entire process generates no carbon emissions.

Traditional methods of producing hydrogen have led to approximately 830 million tons of carbon dioxide emissions per year, equal to the emissions of the United Kingdom and Indonesia combined.

If hydrogen becomes a future renewable energy source, then its production must become more environmentally friendly. For example, the Green Hydrogen Catapult, a United Nations initiative led by some of the biggest green hydrogen project developers worldwide, has recently doubled its goal for green electrolyzers to 45 gigawatts by 2027.

The transition to green hydrogen is essential to the success of global decarbonization. Here are some of the benefits of using green hydrogen as an alternative fuel.

Because sustainability is built into green hydrogen from production to combustion, it will never produce air pollutants like carbon dioxide and other greenhouse gases.

Hydrogen can be stored for long periods rather than requiring use immediately after production. Hydrogen can also travel long distances with fewer weight concerns than natural gas and other fuel options.

Gasoline can combust when exposed to air with just 1 to 3 percent oxygen. In contrast, hydrogen is only volatile at 18 to 59 percent oxygen concentration.

Hydrogen’s lower radiant heat means that the air around its flame is cooler than a gasoline flame, lowering the risk of secondary hydrogen fires.

Because green hydrogen can transform into electricity or synthetic gas, it can be used for domestic, commercial, industrial, and industrial heavy transportation applications.

Although green hydrogen has many advantages, particularly for environmental sustainability, there are some downsides.

Overall, green hydrogen and hydrogen fuel, in general, consumes more energy than other fuels. Producing hydrogen, compressing it, then converting it into electricity is grossly inefficient.

Green hydrogen results in only a 37 percent output compared to batteries, which give back 90 percent of their energy output.

How Green Hydrogen Can Be Used

Many world governments and companies have pledged to switch to green hydrogen as an alternative fuel source to meet standards for decarbonization, with an overall goal of net carbon neutrality.

According to RMI, green hydrogen plays a considerable role in decarbonization and is predicted to make up 25 percent of total energy use.

Hydrogen has a stellar reputation as a renewable energy source because it is a clean energy source. Compared to fossil fuels like oil and coal, hydrogen emits no carbon or other residue in the air – only electricity, water vapor, and heat.

However, for green hydrogen to become a viable alternative to other forms of hydrogen fuel,  production needs to scale up significantly and reduce its cost by at least three times over the next 10 to 30 years.

However, if intermittent sources convert excess energy into hydrogen, it can be used later instead of defaulting to less sustainable battery storage. Like natural gas, hydrogen can also be stored underground seasonally or until needed.

Hydrogen fuel is often safer than traditional fuel options. For example, hydrogen is lighter than air, so it typically rises and disperses very quickly, reducing the risk of fuel igniting at ground level.

The Future of Green Hydrogen

The hydrogen fuel industry is already well underway in industrialized countries like the United States, France, Germany, Russia, and China. In addition, other nations like Japan have become the first to adopt a national hydrogen framework to reduce the cost of hydrogen to about one-third of its current level by 2030.

Although using green hydrogen in commercial and consumer applications will not be viable for several more years, hydrogen demand exists in many industrial processes. For example, the decarbonization of ammonia, iron, and other commodities can benefit from replacing grey hydrogen fuel with green hydrogen.

In the shipping and aviation sectors, drop-in fuels (based on green hydrogen but otherwise identical to jet fuel and oil-extracted methanol) can be used in existing planes with few adjustments in their fuel structures.

The biggest drawback is that these fuels do contain carbon dioxide, which must then be captured and added back to the hydrogen to be released during combustion. So ultimately, this will reduce carbon emissions but not eliminate them.

Ships can also switch to green ammonia, produced from green hydrogen and nitrogen from the atmosphere but without carbon dioxide. However, this transition requires replacing engines and fuel tanks, and green ammonia is still significantly more expensive than fuel oil.

FASTECH: The Experts in Hydrogen Infrastructure Design and Construction

The demand for hydrogen as a fuel source has tripled in the past 40 years and continues to rise. As the future of clean energy, green hydrogen enables many industries to transition to renewable energy and pave the way for a sustainable energy economy.

To date, FASTECH has built over 30 hydrogen stations for leading corporations and energy providers. Our end-to-end hydrogen infrastructure solutions start with comprehensive consultation, design, and engineering. We also include complete site design and build, maintenance, testing, and compliance to ensure each project meets all safety and environmental compliance requirements.

Contact us today to learn more about how you can start designing your energy infrastructure project.