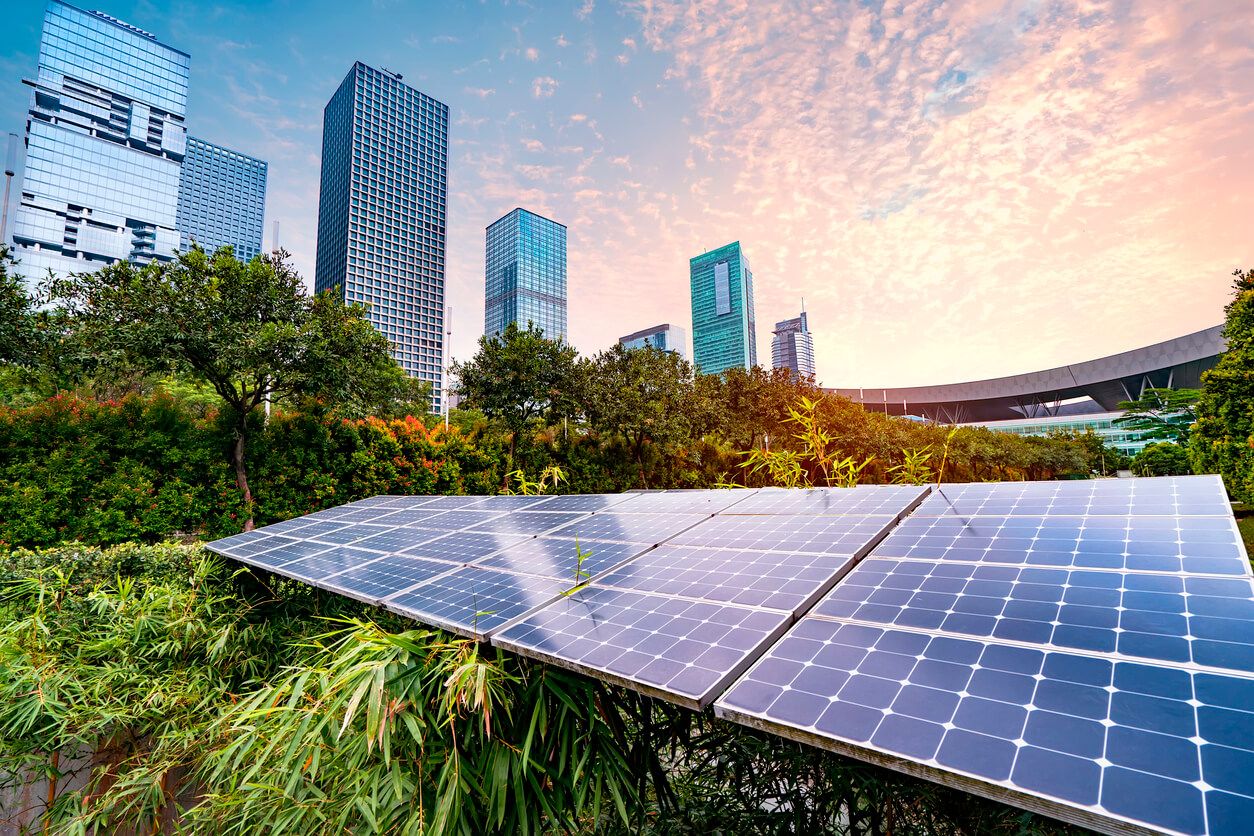 Urban areas are often associated with substantial carbon footprints. For example, in 2019, a research team determined that the top 100 highest-emitting metropolitan areas produced 18% of global greenhouse gas emissions. But things have been changing quickly. Some of the most significant clean energy progress in recent years has come from urban areas.

Today we’ll explore the rise of renewables in cities, four of the most impactful ways they’re transitioning to clean energy, and some notable US examples.

Before renewable energy in cities can be impactful, they first need to establish targets like any other initiative. For example, following the federal government’s withdrawal from the Paris Agreement in 2017, many of the United State’s largest cities reaffirmed their commitment to a future powered by renewable energy. (Note: The United States formally rejoined the Paris Agreement in February 2021.)

Per REN21, a global renewable energy community spanning scientists, governments, non-government organizations (NGOs), and industry professionals, 350 North American municipal governments had set renewable energy targets by the end of 2020. Roughly 42% of the 834 city-level commitments worldwide can be found in the US and Canada.

Transitioning from fossil-fueled to renewable energy sources requires a comprehensive plan tailored to an individual city’s constraints. However, some challenges, like building wind power infrastructure, are shared by nearly all metropolitan areas. Similarly, many cities are adopting the same strategies. Let’s look at some of them.

Although setting targets is the first step to renewable energy transformation, supportive laws and policies must be enacted to start making real-world progress. These must be followed by transactions with renewable energy providers.

According to data compiled by the American Cities Climate Challenge Renewables Accelerator, 1183 transactions occurred between 2015 and 2021. These deals span:

Instead, these cities must fund or partner with developers to build renewable energy generation sites elsewhere. These contracts are known as off-site power purchasing agreements (PPAs).

However, cities still face the challenge of transporting the energy generated at these locations, and they’ve begun building the infrastructure to do so. For example, SoCalGas’ Angeles Link project will construct a pipeline capable of delivering green hydrogen fuel equivalent to three million gallons of diesel daily to the LA Basin.

One of the conveniences of living in an urban area is accessibility and public transportation. But while public transit helps reduce overall emissions, these vehicles can be amongst a city’s biggest polluters. And to help meet their climate change commitments, many cities are targeting these networks to facilitate their transition away from fossil fuels.

It’s no longer uncommon to find sustainable buses in a city, such as those powered by:

In some areas, further geothermal innovation is taking place. One cutting-edge example? Washington state is investigating how to use the Cascade mountain range’s volcanic activity to provide electricity for the Seattle-Tacoma area.

US Cities Setting An Example

These types of initiatives are being combined with alternative energy technologies in cities across the US to help mitigate climate change. And looking at some of the major renewable energy deals highlighted by the American Cities Climate Challenge Renewables Accelerator in 2021, we can learn from some examples around the country:

Streamline and Speed Up Your Transition to Renewables with FASTECH

As a leader in engineering, procuring, building, and maintaining hydrogen, CNG and LNG infrastructure, FASTECH is committed to helping cities do their part to mitigate climate change. Our projects build out the essential renewable energy infrastructure that California’s cities have come to depend on – and we’re just getting started.

To learn more or get started on your project, reach out to us today!