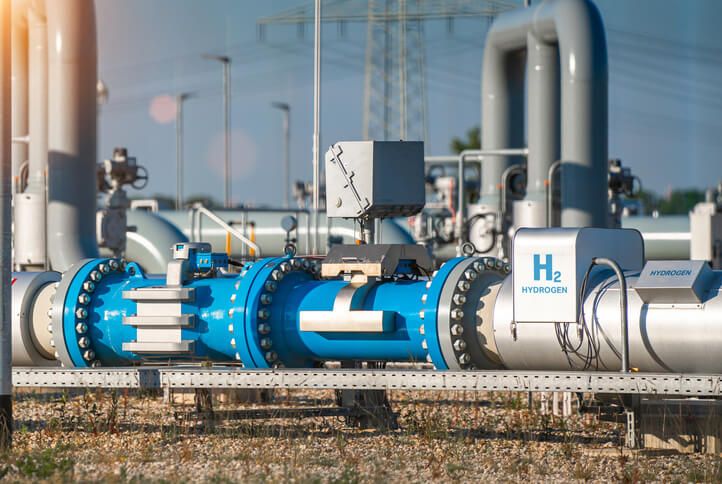 As the most abundant known element in the universe, hydrogen promises efficient, clean energy that produces no direct emissions of pollutants or greenhouse gases. Hydrogen trends show that this renewable energy source has become widespread in transportation, manufacturing and power generation sectors.

The global hydrogen generation market is expected to grow from $160.0 billion in 2022 to $263.5 billion by 2027. In addition, the demand for fuel cell electric vehicles (FCEVs) and rockets in the aerospace industry is also driving market growth.

President Joe Biden signed the Inflation Reduction Act of 2022 into law in August 2022. ​​Also known as the U.S. Climate Bill, this law promises to invest about $370 billion to reach international climate goals, including reducing greenhouse gas emissions 40 percent by 2030.

The law’s primary investments lean toward energy and climate measures, including:

Expanding hydrogen infrastructure is critical in making alternative fuels available for commercial and public use. Rather than hiring separate contractors for projects, companies building refueling stations are relying on end-to-end EPC (engineering, procurement and construction) contractors to streamline infrastructure projects.

While many urban areas are creating large carbon footprints, some cities are taking a new approach by moving away from fossil fuels. Here are some strategies that cities are incorporating in their transitions.

Why pursue a career in the renewable energy job market?

Focus on projects related to power distribution is anticipated to boost demand for hydrogen market growth. Along with the need for cleaner fuel sources, hydrogen is an effective energy carrier, contributing significantly to its acceptance into newer markets.

In addition to usage in passenger vehicles and mass transit, hydrogen fuel cells are being utilized in the transportation sector for:

Hydrogen is cost-effective and a reliable source of electricity generation. Therefore, hydrogen-based power generation technology has emerged in mature markets like North America and Europe, where clean and effective energy generation is eagerly sought after.

In addition, hydrogen is historically produced at a central production facility and then transported and sold to consumers via bulk tank, pipeline or cylinder truck. However, natural gas pipeline networks could be used to transport and distribute hydrogen in the U.S., Canada, and Russia.

Read how the Angeles Link will impact California’s hydrogen infrastructure

The Asia Pacific market, led by China, dominated the global market in 2021, accounting for 41.40% of the hydrogen revenue share.

Hydrogen producers in this region are targeting countries like Indonesia, Vietnam, and South Africa to boost revenues. As a result, some U.S.-based market players are considering expanding operations in these countries as part of their strategic growth plans for hydrogen production.

As renewable electricity becomes even more affordable, building more hydrogen infrastructure is the next step toward the future of hydrogen. Even after accounting for the costs of transporting hydrogen from remote locations, infrastructure powered by renewable energy is still a low-cost supply option for hydrogen.

FASTECH has built over 30 hydrogen stations for leading corporations and energy providers, including Toyota, Shell, and Chevron.

To learn more about hydrogen infrastructure and how FASTECH can help you build alternative fueling facilities, contact us today.